Monday will be the 142nd anniversary of the Paris Commune.

The Commune was the first Dictatorship of the Proletariat. Although it wasn’t socialist, since the bourgeois still owned the means of production, but the government was controlled by the workers, and worked for them.

Marx on the Commune:
Civil War in France
Paris, the central seat of the old governmental power, and, at the same time, the social stronghold of the French working class, had risen in arms against the attempt of Thiers and the Rurals to restore and perpetuate that old governmental power bequeathed to them by the empire. Paris could resist only because, in consequence of the siege, it had got rid of the army, and replaced it by a National Guard, the bulk of which consisted of working men. This fact was now to be transformed into an institution. The first decree of the Commune, therefore, was the suppression of the standing army, and the substitution for it of the armed people.

The Commune was formed of the municipal councillors, chosen by universal suffrage in the various wards of the town, responsible and revocable at short terms. The majority of its members were naturally working men, or acknowledged representatives of the working class. The Commune was to be a working, not a parliamentary body, executive and legislative at the same time.

Instead of continuing to be the agent of the Central Government, the police was at once stripped of its political attributes, and turned into the responsible, and at all times revocable, agent of the Commune. So were the officials of all other branches of the administration. From the members of the Commune downwards, the public service had to be done at workman’s wage. The vested interests and the representation allowances of the high dignitaries of state disappeared along with the high dignitaries themselves. Public functions ceased to be the private property of the tools of the Central Government. Not only municipal administration, but the whole initiative hitherto exercised by the state was laid into the hands of the Commune.

Having once got rid of the standing army and the police – the physical force elements of the old government – the Commune was anxious to break the spiritual force of repression, the “parson-power”, by the disestablishment and disendowment of all churches as proprietary bodies. The priests were sent back to the recesses of private life, there to feed upon the alms of the faithful in imitation of their predecessors, the apostles.

The whole of the educational institutions were opened to the people gratuitously, and at the same time cleared of all interference of church and state. Thus, not only was education made accessible to all, but science itself freed from the fetters which class prejudice and governmental force had imposed upon it.

The judicial functionaries were to be divested of that sham independence which had but served to mask their abject subserviency to all succeeding governments to which, in turn, they had taken, and broken, the oaths of allegiance. Like the rest of public servants, magistrates and judges were to be elective, responsible, and revocable.

The Paris Commune was, of course, to serve as a model to all the great industrial centres of France. The communal regime once established in Paris and the secondary centres, the old centralized government would in the provinces, too, have to give way to the self-government of the producers.

Between capitalist and communist society there lies the period of the revolutionary transformation of the one into the other. Corresponding to this is also a political transition period in which the state can be nothing, but the revolutionary dictatorship of the proletariat.—Critique of the Gotha Program (1875)
Karl Marx

The dictatorship of the proletariat is not a dictatorship in the classical roman sense. It is a class dictatorship, where a class is dominant. Therefore, the dictatorship of the proletariat is the proletariat expressing its political hegemony. The proletariat is the class which sells its labour to survive, the proletariat is you and I. If you have a boss, you are proletarian.
Now, the world lives under capitalism, the dictatorship of the bourgeoisie, i.e. the bourgeoisie, the capitalists, factory owners, those who own the means of production, who subsist solely off others people’s labour and by exploiting. Whoever you vote in will be rich, and they will act in their own interests, using the state as a tool to exercise their political hegemony.
The state would be ran though soviets, in which workers elect representatives, which are recallable and accountable. The delegates would go in and pass their views to a larger soviet that encompasses a certain area, and is made up of a number of delegates from the basic soviets. This continues until we get to the soviet that covers the whole country.
This would allow the people to have control over their area, workplaces and lives, and they will undoubtably peruse their class interests. 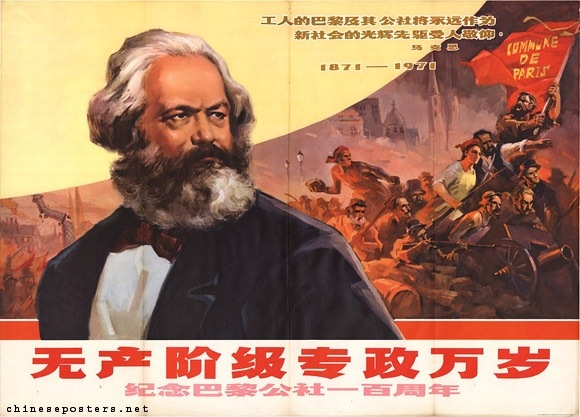 The flag translates to Paris commune, which is widely accepted as the first dictatorship of the proletariat, and served as a lesson to what happens if one is too liberal in a revolution.

Socialism could never work as it goes against human nature. We, as a race, naturally compete.

Ha. Whom says this? The capitalists. In this system, yes, we compete instead of cooperate. We do this because we live in a competitive system, where the few exploit the majority to live in luxury and throw the rest to the devil- as long as they still work. Let me take you back to pre-civilisation, as it is so called (doublespeak).
What would man have to gain from turning on his brother? Nothing.
If they cooperated, however, they could get more than 2 men working alone. Thus, it doesn’t make sense to compete.
We have overcome these hardships that hunter gatherer societies faced. Now, a few hundered men with machinery can feed ten thousand. Survival is the key motive, the will to live. With money abolished, we are merely cutting out the middleman between work and survival, as we need money to live, thus, we work to live.
The ‘communism can’t work because of human nature’ argument has been debunked, ironically using human nature and examples from so called ‘primitive communism’.
Capitalism can’t work because of human nature, as humans don’t like being exploited. Anarchism means one is free to do what they want as long as it does it involve exploration of another, or it limits others freedom.
We will have no economic chaos, or any chaos.
Opposed to the caricature of anarchism, anarchy equals order.