Is China lined up for economic collapse?

As the developed world is still suffering from the 2007 global economic crisis with austerity the weapon of choice by the ruling elite around the world is China, who though has not been immune to the global effects as demand for Chinese manufacturing declined slightly as belts were tightened, lining itself up for the same?

Chinese banks have long been ‘cooking the books’ and it’s getting worse, credit for loans is available to those with bad credit on an unprecedented scale in China. Just the same as was in the US that kicked off the global recession.

The problem is not just how much risk there is in the Chinese banking sector but ‘risky loans’ being shifted to the lightly regulated ‘shadow banking’ institutions – mainly trust companies, brokerages and insurance companies.

According to Reuters:
Trust assets increased 55 percent in 2012 to 7.5 trillion yuan ($1.21 trillion), according to the China Trustee Association, while funds entrusted to brokerages by banks soared more than fivefold to 1.61 trillion yuan.

Capitalism doesn’t work, western capitalism or Chinese capitalism, it doesn’t matter. Banking, finance and ‘the markets’ are always a catastrophe waiting to happen. 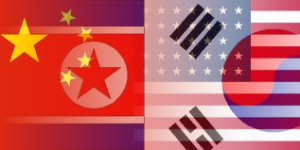 The Korean peninsula still dominates the global media in a one-sided look at the issue, the evil North Korea against the innocent US/South Korea. It’s almost as ridiculous as North Korea’s propaganda!

In the latest developments North Korea has told the embassies in Pyongyang that, in the event of war, it cannot guarantee their safety and that they should strongly consider evacuating the country, it has asked to be notified whether they are staying or going by the 10th April.
The US has moved missile defence systems to new locations including Guam and in a statement said that is is ready for any eventuality.

North Korea is guilty of lacking democracy, incompetent management, developing nuclear technology and a space program and as such pretty much just has China as a trading partner with sanctions coming from all corners of the globe. The US has a nuclear program, has used nuclear weapons against civilians and has a phoney two-party state ‘democracy’.
If you box someone into a corner, the only rational response is to lash out, from a caged animal to a country.

North Korea shouldn’t have nuclear weapons but should it be under such economic sanctions?
Are North Koreans actions and words justified? Have you ever thought about understanding the situation from their perspective?

No war, no nuclear weapons, it is the innocent, the working class who suffer.

A study on Chinese soil pollution by Chinas leading environmental watchdog will not be released by the ministry of environmental protection in its entirety.

The ministry of environmental protection said that is would not release all the data due to security reasons. Surely a cover for the horrific scale of environmental damage going on in China.

China’s official data already exposes huge environmental damage with the groundwater of two thirds of cities marked as severely polluted and two-fifths of rivers are tainted.

Last month air pollution in China’s capital Beijing reached hazardous to human health levels as confirmed both by China and the World Health Organisation (WHO).

Environmental awareness is rapidly increasing in China and hopefully the latest development will add pressure on the government to do something about it. 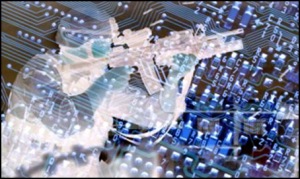 The media is talking about the latest Chinese military hacking of the US, this time targeting US infrastructure.

How is this news?

Country’s military cyber departments are always hacking each other, stealing information and/or infecting systems with viruses etc and then in turn those governments deny it.

Daily/weekly occurrences are not news!

Unless something significant happens on the cyber warfare front put a sock in it!

Working for the Advancement of North Korean Energy Research

North Korea tests a nuclear weapon, the US does nothing. Someone mentions in a pentagon corridor that Iraq might have WMD, the US invades.

The skeptic says: Iraq has oil
The realist says: Chinese soldiers will kill US soldiers (again)
The optimist says: The US is a peaceful nation

North Korea said it would test a small nuclear bomb after the UN added further sanctions and it did just that this morning (3am GMT).

The situation so far…

Following this mornings nuclear test the UN’s Secretary General Ban Ki-moon said it was a “clear and grave violation” of UN resolutions and that it was “deeply destabilising”.

The UN will meet at 2pm (GMT) to decide what action should be taken. 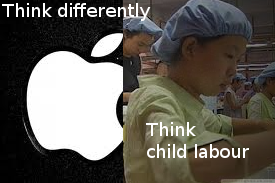 11 factories that Apple uses as suppliers have been found to employ children (under 16s) with the worst cases coming from China.

Surely Apple must be aware that when they use suppliers from developing countries that examples like this will certainly happen, the lack of standards in developing countries is what helps wages stay so low. This is the precise reason why Apple goes to these countries, to keep costs down and profits up, this is why they use Chinese labour instead of American labour or British labour.

This is globalisation, this is capitalism.

ACA The Underground
Create a free website or blog at WordPress.com.