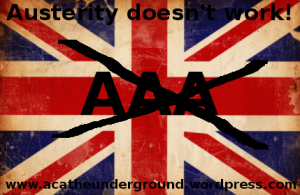 The UK has lost its triple A credit rating after it was downgraded by Moody’s.

The list of countries with a AAA credit rating is ever shrinking as the global capitalist economy continues to struggle.

All of Scandinavia continues to rate as AAA with the 3 main credit rating agencies (S&P, Moody’s & Fitch), here’s a sample of how some other counties are faring:

While Labour’s contribution to the economic situation we find ourselves in the UK should not be forgotten (selling of gold reserves at a very low point, keeping essential services in private hands and introducing private finance initiatives in the National Health Service etc) the Conservatives (tory) and their coalition partners the Liberal Democrats (Lib Dems) are making a bad situation worse.

The British public must wake up and and ditch the main 3 parties who have continually ruled and screwed over the country, we need change and we need it now!